A BW/4HANA Conversion in pictures 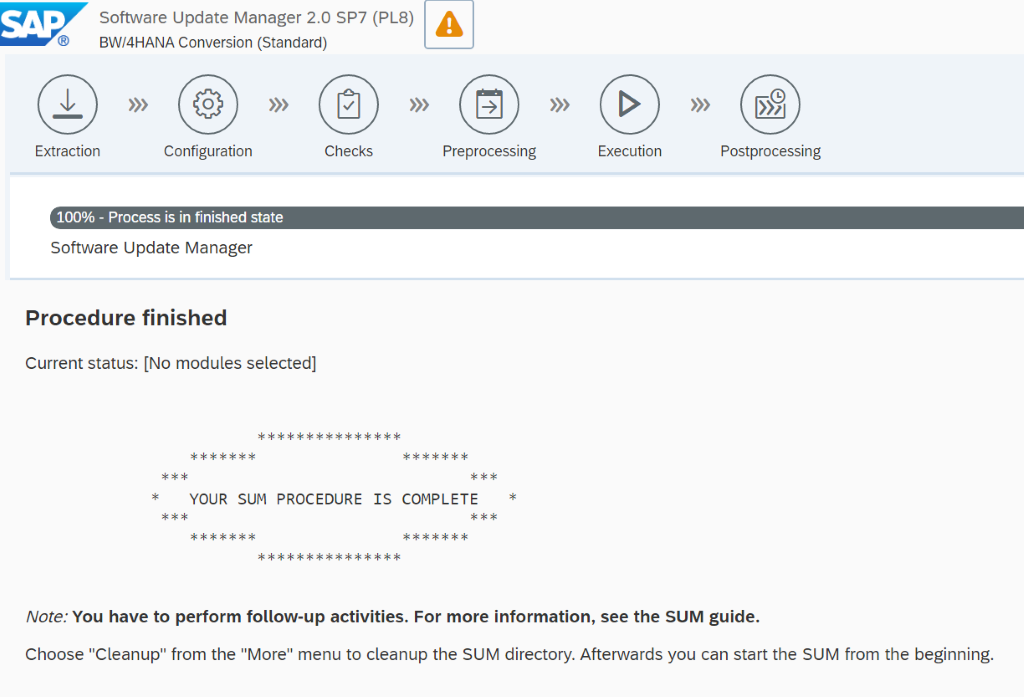 Recently we converted a SAP BW 7.5 (SP 16) on HANA system to a BW/4HANA 2.0 (SP 05). SAP provides you with three conversion paths, the so-called “In-place Conversion”, “Remote Conversion”, and “Shell Conversion”. Here we followed the “In-place Conversion” path as the system was already almost BW/4 ready. This document provides a rough idea how the different steps look like. This was a demo system of ZPARTNER, doing the same for a productive system could be slightly more challenging the steps will be the same.

Then you select the File for the In-place Conversion (Figure 2).

After selecting the XML file, it is possible to run the Note Analyzer. Before running the program, you can select if missing Notes should be downloaded already. The result will show a list with missing Notes to be installed. The missing Notes need to be implemented and then the overall status should be green or yellow like in Figure 3.

The SAP BW/4HANA Transfer Cockpit is the main interface to perform the most tasks which need to be executed during or before the conversion. It can be accessed with the transaction RSB4HCONV.

The first step during our conversion was to execute the Pre-Checks which can be done from the SAP BW4/HANA Transfer Cockpit. It is possible to execute this step either Online or in Batch.

After the successful execution, a report is created which tells you which objects need to be taken care of. For most objects there is also a Note shown how to handle them. Additionally, you get the information during which Operating Mode the objects will be checked. This lets you know before changing an Operating Mode that these objects might cause an error and need to be taken care of beforehand.

You have the following options:

As we deleted many obsolete and not used objects, there is the possibility to manually delete them but there are also other options.

For mass deletion of objects, the program RS_DELETE_TLOGO can speed up things a bit. ATTENTION: The usage of this reports needs to be handled with care. Used wrongly you can destroy your BW system!!!

In some cases we had to delete them manually from the table ROOSGEN:

In the system an AddOn (DSIM) was installed previously which was at the time not BW/4 ready. Before performing the conversion, it was necessary to uninstall previously installed components, because they will block the conversion. The components can be uninstalled and upgraded via the transaction SAINT.

To uninstall the components, we had to upgrade(!) the AddOn Demand Signal Management (DSIM) before. As you can see in Figure 9 not all components were available for uninstallation before.

After the update, the components are available for uninstallation (Figure 10).

For the uninstallation of MDG Foundation (MDG_FND) and SAP Business Suite Foundation (SAP_BS_FND) SAP NOTE 2654906 needs to be considered (https://launchpad.support.sap.com/#/notes/2654906). We would recommend uninstalling the components in the background.

For the uninstallation of the SAP Web UI Framework (WEBCUIF) respect SAP NOTE 2417905 (https://launchpad.support.sap.com/#/notes/2417905). If you have not implemented, it before you will get a warning to do so (Figure 12).

The uninstallation of the components will stop at certain points. Then it is recommended to repeat the task in dialog because the system will ask to confirm or execute certain tasks. (Figure 13 & Figure 14)

Before changing the Operating Mode from Compatibility Mode to the B4H Mode the technical content will be checked. There is a separate Button in the BW/4HANA Transfer Cockpit to do so.

During the realization of the conversion it is required to change the Operating Modes in SAP BW/4HANA Transfer Cockpit. The different modes request different actions to be beforehand (like deleting or transferring “old” objects to “new” objects). Please refer to the Pre-Check Report which objects need to be handled before each Operating Mode can be set. The Conversion Guide will give you more insights on the different Operation Modes.

The Operation Mode can be changed in the SAP BW/4HANA Transfer cockpit.

The new mode can be selected and executed (Figure 18).

After the Execution, the Compatibility mode is set.

When executing the B4H mode a Task List Run will be created and needs to be processed (Figure 20).

We started the Task List Run and at a certain point it stopped due to an Error (Figure 21).

By continuing in dialog, we were asked for a Transport Request and could continue with the Task List Run (Figure 22).

At another point the Task List run was stopped to confirm the deletion of not supported source systems (Figure 23).

And finally, the switch to the new mode needed to be confirmed.

Hint: If there occurs an error at the end debug the class to check which objects still block the finalization of the new mode. Therefore, go to the log (Figure 25) to identify the class (Figure 26) which is used in this step.

In this example there was an error shown at the final step and by debugging the class we could identify the objects which were still blocking the new mode setting.

To Ready for Conversion Mode

The Task List Run stopped at the phase “Transfer from InfoObjects and Open Hub Destination”.

A separate Task List Run for the Transfer from InfoObjects and Open Hub Destinations will be started.

We got an error to handle several objects because they were inactive and Transfer rules needed to be deleted.

We activated the inactive objects and deleted the Transfer rules. The transfer rules could be deleted in the table RSISOSMAP.

Then we could continue the run. At the second phase the Task List Run stopped again and asked us to update the Transfer Tool. The Transfer Tool can be updated in the BW/4HANA Transfer Cockpit.

At a later point the Task Lis Run stopped again, asking us for releasing a request. After releasing the request, we could continue.

The TASKID and the EXTERNALID can be found in the table ODQTASKQUEUE.

After this Task List Run was finished we could continue with the Task List run Ready for Conversion Mode.

And finally, our system was Ready for the Conversion!

Figure 37: Define the change in the Maintenance Planer

For the SUM process we performed the following steps:

At first, we selected the Stack XML File

Then the uninstallation of SAP BW had to be confirmed.

Then we define the Target Support Package.

Then we were ready to start the conversion.

A little bit later the Post-Processing steps need to be performed in the converted system.

The system is up and running.

The first step in the Post-Conversion is to start the SAP Note Analyzer and select the XML File “After_System_Conversion”.

In the Note Analyzer Result a few notes had to be implemented.

After the implementation, the Note Analyzer shows a positive status.

Another step mentioned in Figure 43 is to perform the Task List Run “SAP_BW4_AFTER_CONVERSION”. Start the transaction STC01 and select the Task List.

Check the last two phases to activate the Services for the BW Modelling Tools and SAP Analytics Cloud Integration.

After the finalization of the Note Analyzer and the Task list run finish the SUM:

In our case the BW/4HANA Cockpit was not accessible at first. Therefore, we executed the transaction BW4CHECK, which shows you missing services which need to be activated.

Then we activated the services in transaction SICF

Finally, the transaction BW4CHECK shows us that all services are running.

At the end, the BW4 Cockpit is up and running.

In contrary to a normal BW upgrade known from the past, the InPlace Conversion is a completely different story. This document provides an overview of the different steps. If you need support, please feel free to contact ZPARTNER. We do have the experience in this area to get you from your existing BW System to BW/4HANA, regardless which approach you want to follow.